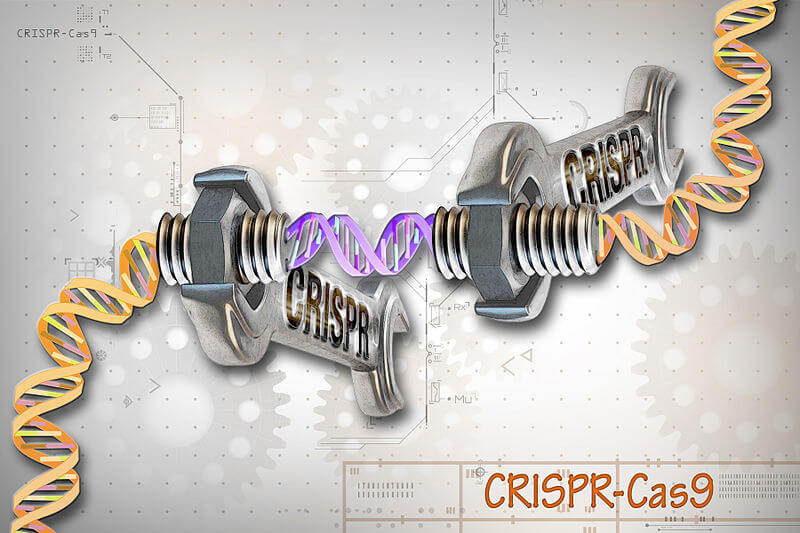 Researchers using a new technique for editing genes have shown that it can treat sight loss in an animal version of retinitis pigmentosa. The team used a pair of “molecular scissors” to cut out a genetic fault that causes the inherited eye condition.

The molecular scissors technique is known as CRISPR/Cas9. It’s based on the way that bacteria protect themselves from infection by a virus.

When a virus invades, bacteria make a copy of part of the invader’s genetic material. The copy gets stored in a library of past invaders. Next time the virus comes along, bacteria can use the copy to recognise which virus it is and guide Cas9 (the molecular scissors) to disable the matching gene. Scientists have discovered that it’s possible to engineer this system so that it can turn target genes on or off or even re-write them.

In this study Professor Shaomei Wang and team at the Cedars-Sinai Institute in California designed a CRISPR/Cas9 system to target a faulty gene that causes loss of the light-detecting ‘photoreceptor’ cells in a part of the eye called the retina. The treatment was given by injection under the retina to rats with a type of retinitis pigmentosa caused by this particular genetic fault (in a gene known as RHO).

After a single injection, the rats were able to see better than ‘control’ rats who had not been treated. This was measured by what’s known as their ‘optomotor reflex’ which involves turning the head in response to moving stripes with different levels of brightness.

“This study is an important proof-of-principle that inherited retinal disorders may be treated using the CRISPR/Cas9 gene editing technique,” said Dr Dolores M Conroy, Director of Research at Fight for Sight. “It also adds to the growing evidence that gene editing may be particularly suited to developing treatments for inherited eye conditions by targeted removal of the genetic fault, to remove the toxic effects on retinal cells.”

Another team of researchers, this time at the University of Iowa, has been working on CRISPR/Cas9 to treat an X-linked form of retinitis pigmentosa. They have published proof-of-concept results showing that gene editing can correct genetic faults in stem cells generated in a lab dish from a patient’s own skin cells. This is important because these ‘induced pluripotent’ stem cells (or iPSCs) can become any cell type in the body. So they could potentially be transplanted back into the same patient to replace cells lost to disease without fear of rejection by the immune system.

The catch is that cells coming from the patient’s body will also carry the genetic fault. But in this study the team showed that the target genetic fault can be cut out and replaced with a healthy version while the induced stem cells are in the lab dish. Their next steps will be to try to grow the stem cells into photoreceptors that are ready to be transplanted into a retina.

We’re very excited about the work that Fight for Sight researchers Professor Tara Moore at the University of Ulster and Professor Irwin McLean at the University of Dundee have been doing with CRISPR/Cas9 in mice carrying the human genetic fault that causes Meesmann corneal dystrophy. They were the first to show in a living animal the method also used by Wang and colleagues to guide Cas9 to its target with high accuracy. Their project is ongoing, but this is a very fast moving field so we look forward to reporting more on their progress in the not too distant future.

You may also have seen the news this week that in the UK, scientists have been given the go-ahead to begin gene editing research with human embryos. The research can only take place on embryos during the first 7 days after fertilisation and they must be destroyed by day 14.

The aim is to understand the earliest stages of human development. But it’s a controversial decision as some people believe that this is the first step on the road that will one day lead to designer babies.