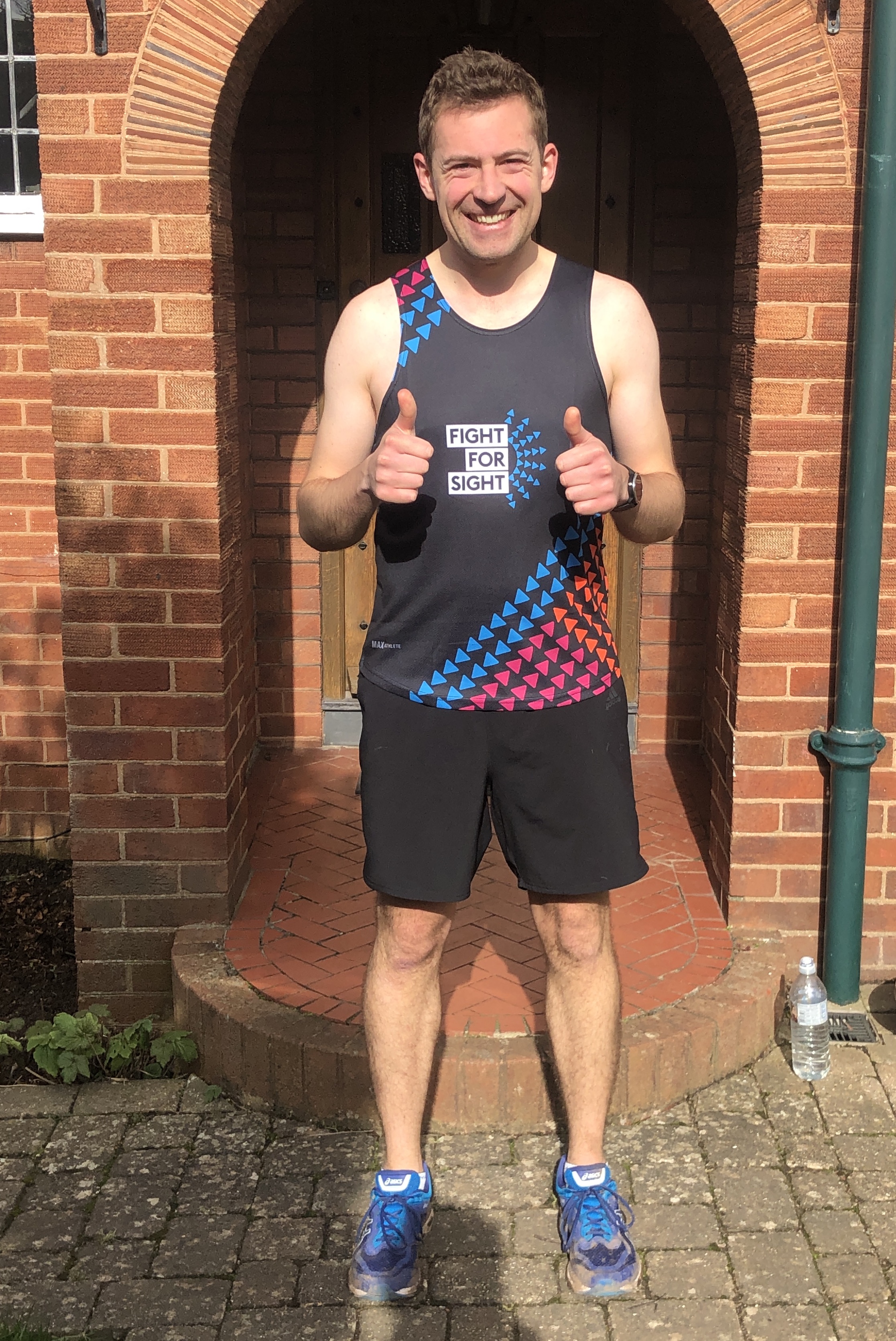 Mark, 28, will run 26km this weekend for the 2.6 Challenge to raise money for eye research charity Fight for Sight, after he took part in a life-changing clinical trial to halt his sight loss.

The 2.6 Challenge is a fundraising effort by the organisers of the biggest mass-participation sports events in the UK to save the UK’s charities whose funding has been adversely affected by the Covid-19 pandemic.

Mark, a lawyer, who now lives and works in London, was diagnosed with choroideremia when he was 14 after his parents began to suspect he might have inherited the rare eye condition. Choroideremia mainly affects men and progressively leads to blindness. Mark’s brother and his cousin Nick both have the condition, as did his late grandad, who sadly became blind in later life.

Although Mark has good sight at the moment, he sometimes struggles with his peripheral vision and in 2017 was told he was no longer allowed to drive.

Through the Tommy Salisbury Fund, Fight for Sight funded vital early stage research at Imperial College in 2008 that has led to the development of a new gene therapy treatment for choroideremia. The gene therapy is already halting the disease and even restoring sight for some patients at clinical trial. Mark has been a part of that clinical trial and hopes it will stop his sight deteriorating in his treated eye, meaning he will never go fully blind.

He said: “Losing my driver’s licence hit me hard at the time but being on this trial has given me some perspective. It’s made me realise that I could have an entirely different future as a result of this treatment than I would have had without it. I owe that to Fight for Sight and the research they’ve funded to get the clinical trial to this point.”

Mark is now being monitored regularly to see what affect the treatment has had on his eye. It will take a couple of years before they will be able to determine if it was successful. Mark’s cousin Nick took part in an earlier stage of the same trial, and the remaining sight in his treated eye was saved as a result.

After taking part in the trial, Mark wanted to give something back to help the research he is benefiting from, and was due to run the London Marathon for Fight for Sight this coming Sunday on April 26th. However with the marathon postponed until October, he has turned to the 2.6 Challenge to raise funds. Mark will run 26 km over the course of the weekend, and he’s encouraging others to join him in taking on a challenge in aid of Fight for Sight.

He said: “It was sadly inevitable that the London Marathon and countless other sporting/fundraising events were postponed or cancelled as a result of Covid-19. It could potentially have a devastating impact on charities, who will not benefit from the government’s charity support package, so I think it’s great that the London Marathon have organised the 2.6 Challenge this weekend to help raise money for charities like Fight for Sight. I’ve seen first-hand the life-changing eye research Fight for Sight are supporting and the amazing impact it can have for people living with a sight loss condition.”

Chief Executive of Fight for Sight, Sherine Krause, said: “We are so grateful to Mark and all our fantastic supporters who are taking part in the 2.6 Challenge this weekend. It’s important to remember that it’s not only frontline charities that the Government and society as a whole relies on. People with sight loss and eye conditions depend on charities like Fight for Sight to invest in vital research to find treatments and cures for their conditions, which otherwise would not be funded. Eye research was already woefully underfunded, with only 1% of research funding going to this vital area. We need the help of supporters like Mark now more than ever to help us to continue the eye research pipeline throughout the Covid-19 crisis and beyond.”

The 2.6 Challenge is an opportunity for everyone to get creative and do something fun to raise money for vital eye research, whether it’s running 2.6 miles, baking 26 cakes or climbing 26 stairs between 26 April - 3 May.

If you would like to get involved with the 2.6 Challenge, you can do so by taking part in an activity of your choice based around the numbers 2.6 or 26 and fundraise or donate to support Fight for Sight via this link.