An overactive control gene could be behind the main risk factor for glaucoma, according to new research from the USA. The high eye pressure that causes optic nerve damage in glaucoma could be due to a common variation in the gene miR-182.

Glaucoma is a major cause of blindness worldwide. In glaucoma, cells in the optic nerve become damaged and die in a signature pattern that gets worse over time. The optic nerve is the connecting cable between the light-sensitive retina and the visual brain.

Older age, African heritage, family history and high pressure in the eye all increase the risk of glaucoma. There is no direct blood supply to the front of the eye, so instead the eye makes a fluid called aqueous humour that provides oxygen and nourishment. The eye stays at a constant pressure because the fluid drains away as more is made. 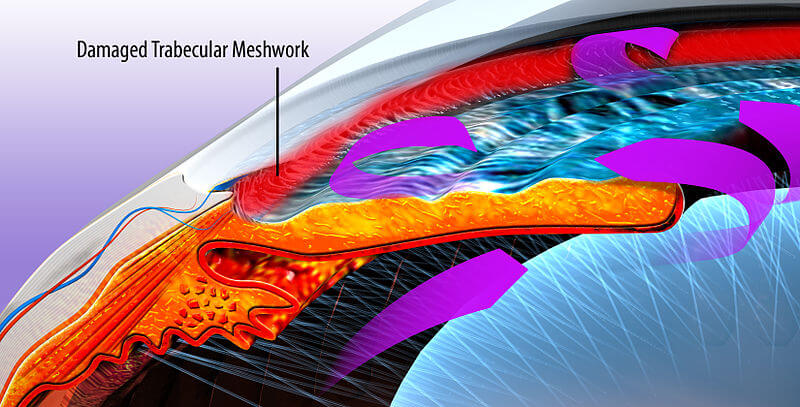 Cartoon of a blocked trabecular meshwork.

But in glaucoma, something happens in the drainage system (the trabecular meshwork) to make it harder for aqueous humour to flow out of the eye. A build-up of pressure can then squeeze and damage the optic nerve, which can result in irreversible sight loss, if not treated.

A family of genes known as microRNAs or ‘miRs’ are already known to be involved in glaucoma. MicroRNAs switch other genes on or off, which means they can control how cells behave. Some microRNAs including miR-182 are active in the trabecular meshwork, so the study authors wanted to find out more about its role.

The research team at Augusta University analysed genetic data from almost 4,000 people with glaucoma and over 30,000 healthy ‘controls’. They found that a particular variation in the miR-182 gene is significantly linked to primary open angle glaucoma, the most common form of the condition. They also found that aqueous humour samples from people with glaucoma and high eye pressure had twice as much miR-182 than samples from controls.

“This is an interesting link between miR-182 and high intraocular pressure in glaucoma,” said Dr Dolores M Conroy, Director of Research at Fight for Sight. “We know that miR-182 is associated with premature ageing of cells in the eye so it may be that its effect in glaucoma is to impede the outflow of aqueous humour from the eye by increasing trabecular meshwork stiffness.

“It would be useful to know whether miR-182 is also upregulated in people of African origin and other ethnicities, as this study only included data from people with European ancestry. But discovering this association opens up a set of potential targets for treatment that could help prevent sight loss from glaucoma.”