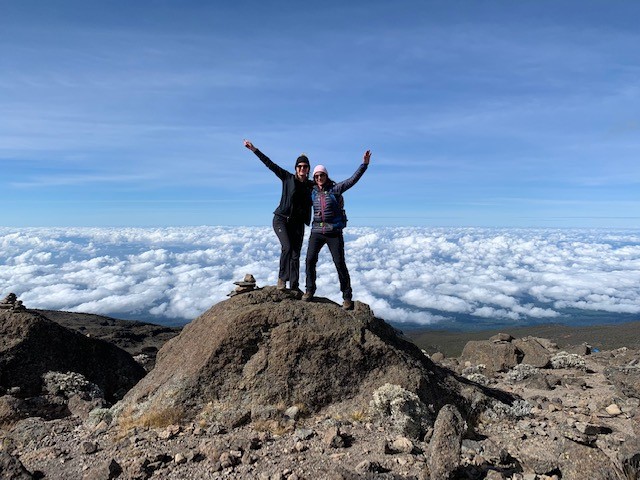 Catherine Parsi had already been fundraising for Fight for Sight for several years when her sister Emma suggested they climb Mount Kilimanjaro.

In 2012 Catherine gave birth to twins, Sienna and Joshua, prematurely at 28 weeks. As a result, Sienna developed retinopathy of prematurity, a condition which happens in premature babies and causes blindness.

Not long after, Catherine discovered Fight for Sight and since then she has completed a number of challenge events, including completing the London Marathon blind folded and running 100k in 24 hours, to raise money for Sienna’s eye condition.

Catherine said: ““Eye research gives us hope that someday there will be a cure for Sienna’s condition. Sienna is a remarkable child and through her guts and determination strives to achieve everything her twin brother can do. She is fiercely independent and overcomes adversity every day. That’s why Emma and I decided to climb Kilimanjaro. Our challenge took us just eight days, but Sienna's is life-long.”

After eight months of training in the gym with personal trainers, Catherine and Emma set off on the climb on World Sight Day, October 10, 2019 and spent seven nights sleeping on the mountain - covering 42 miles and an altitude of 5,895m.

During the course of the trek, the sisters experienced extreme weather conditions and on the day of the summit there was a blizzard. Nevertheless, they completed the trek.

Catherine said: “Despite the elements, it was a massive sense of achievement once we finished. We had a great team and morale in the group was really high – everyone was singing as we were walking.”

“It was almost surreal to return home after completing it. I’ve never felt anything like it. It’s definitely a memory that’s going to stick with me forever.”

Catherine and Emma’s trek raised over £3,300 to help transform the lives of people affected by sight loss.

Inspired by Catherine and Emma's story? Find out how you can conquer the famous 'roof of Africa' and embrace a truly life-changing journey:

Climb Kilimanjaro for Fight for Sight About retinopathy of prematurity