Stuart joins Fight for Sight to raise awareness for glaucoma 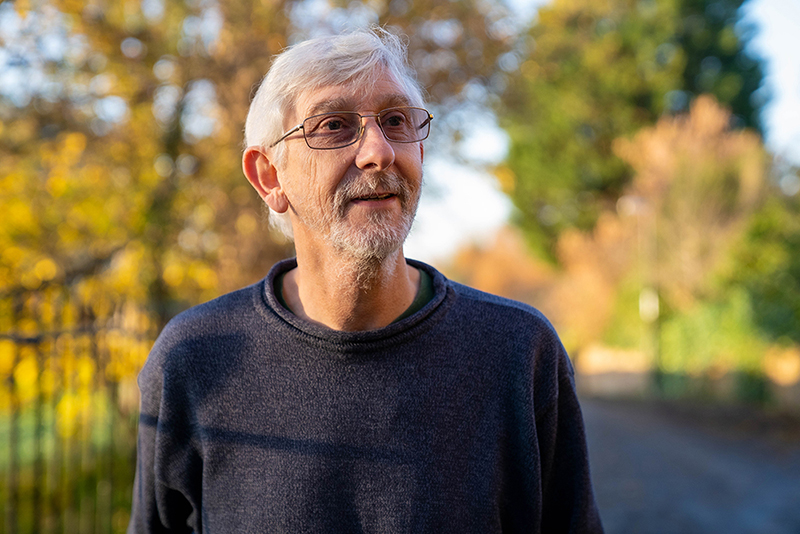 Stuart Brundritt from London is lending his voice to Fight for Sight to raise awareness for the need for early detection of glaucoma.

Stuart was fortunate enough to be diagnosed with glaucoma early and completely by accident. Stuart was working as a technician at City University of London Ophthalmology Division twenty years ago when he was asked to sit in as a patient for a student who had missed his exam. It was then that it was discovered that Stuart had high pressure in his eyes and was a risk for developing glaucoma.

After that Stuart had to have his eye pressure checked regularly and in 2013 he was selected to take part in a clinical trial for laser treatment for glaucoma, known as the LiGHT trial, which was part-funded by Fight for Sight. In 2018 and 2019 he underwent two operations on his eye to correct the pressures.

Stuart said: “I feel very lucky that my glaucoma was discovered so early. People think glaucoma is painful but it’s not at all – you don’t know you have it. When the peripheral vision is being affected, you don’t realise you’re losing it and in a lot of cases by the time it’s diagnosed, it’s too late to stop the damage.”

Stuart said: “The research funded by Fight for Sight is essential to both help detect glaucoma early and to develop the best way of treating it when it is found. It’s made the prospects for my future so much brighter. I am no longer worried about losing my sight in later life.”

At present sight loss from glaucoma is irreversible which is why Fight for Sight is dedicated to funding the most promising studies aimed at preventing and treating this devastating condition. We’re currently funding 21 glaucoma research projects across the UK.

Already, the LiGHT trial has successfully shown that a simple, safe, pain-free laser treatment not only works better than eye-drops at preventing glaucoma from deteriorating but could also save the NHS up to £1.5million per year in direct treatment costs.

Fight for Sight is also funding a project based at the University of Cambridge, which aims to strengthen the connection between the eye and the brain, protecting and re-growing the vital cells that are damaged by glaucoma and other conditions.