Fight for Sight as it exists today evolved through a merger of Fight for Sight and the British Eye Research Foundation in 2005. It was founded in 1965 by the UK’s first ophthalmic pathologist, Norman Ashton. Born in 1913, Ashton qualified in medicine in 1939. In 1948 he was invited to be Director of Pathology at Moorfields Eye Hospital and the newly created Institute of Ophthalmology at the University of London, a post he held for 30 years. From his lab, Ashton published over 200 papers and trained numerous ophthalmic pathologists who dispersed around the globe. 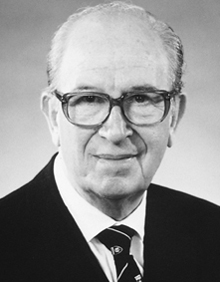 In 1953 Ashton discovered that excessive oxygen given to compensate for breathing problems associated with premature birth can cause blindness. His team's observations led to the careful control of oxygen delivery to premature infants and saved the sight of many babies. Subsequent work supported by Fight for Sight has helped to develop techniques to salvage vision in premature babies with sight threatening retinopathy.

Events that have shaped our history

Fight for Sight was founded by Professor Norman Ashton CBA. He was director of pathology at the Institute of Ophthalmology and a world leader in research into eye diseases.

1983
Established the UK Corneal Transplant Service that has helped over 75,000 people continue to enjoy the world around them.

1993
The Help a Child to See charity was amalgamated with the Iris Fund.

2004
The Iris Fund changed its name to the British Eye Research Foundation.

2005
Fight for Sight merged with the British Eye Research Foundation to create the largest national charity dedicated to funding eye research in the UK.

2007
Fight for Sight presented Moorfields Eye Hospital with £1m to develop the research unit at the Children's Eye Centre.

2007
All of the assets of the British Eye Trust were transferred to Fight for Sight.

2007
A major study funded by Fight for Sight started in 2007, investigating the clinical usefulness of pupil measurements in the assessment of optic nerve function.

2007
Fight for Sight funded PHD student Simon Brook who works with Dr Alison Hardcastle.
Their research discovered the gene that is implicated in Nance-Horan syndrome, which causes babies to be born with cataracts and other birth defects.

2011
Funding by Fight for Sight enabled a British team of researchers to lead the world in starting the first clinical trial of choroideremia.

2011
Funded by Fight for Sight, researchers from Queen's University Belfast identified a new gene involved in the development of keratoconus.

2013
Publication of patient's priorities for research as identified by sight loss and vision priority setting partnership.

2013
New NHS test for babies born with cataract speed up diagnosis and help ophthalmologists decide on the best treatment at an earlier stage.

2014
Nightstar created to take gene therapy treatments to market. The formation of the company builds on the research made possible by the Tommy Salisbury choroideremia fund at Fight for Sight. Syncona invests £17 million.

2015
Nightstar closes a $35m round of funding led by new enterprise associates.

2016
Tommy Salisbury choroideremia fund passed the milestone of having raised £500,000.
Emma Salisbury was also given the prime minister's points of light reward.

2016
Researchers at the University of East Anglia publish data showing that changes in the design of artificial lenses could substantially reduce the rate of development of secondary cataracts.

2016
At the University of Oxford, the first trial into the treatment of X-linked Retinitis Pigmentosa commenced. This gene therapy could potentially be the first treatment for those affected by this condition.

2017
Nightstar therapeutics files to raise up to $86 million in a Nasdaq public offering. The money will allow Nightstar to complete a phase iii trial of its choroideremia gene therapy.

2017
Fight for Sight launches a new funding scheme, the primer fellowships aimed at providing people with early stage research experience and set them on a pathway to becoming the research leaders of the future.

Read about some of our successes