Damaged cells in the optic nerve of mice have re-grown their connections from the eye to the brain in response to a combination of 2 new treatments. The research is published today in the journal Nature Neuroscience and is a major step forward towards developing cell regeneration therapy.

The optic nerve is the specialised cable that runs information about what we’re seeing from the light-sensitive part of the eye (the retina) to the next part of the brain that deals with vision. It’s like a bundle wires, made of the connections (axons) from around a million retinal ganglion cells. 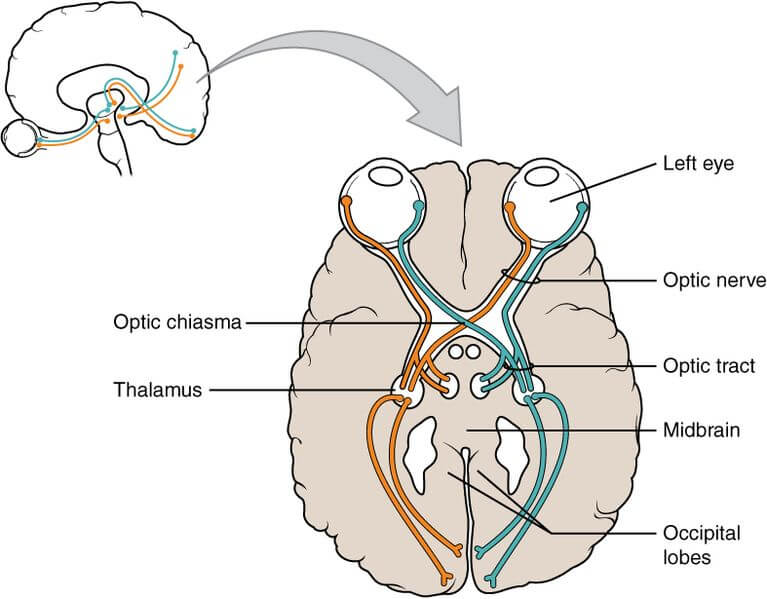 Damage to the optic nerve from injury or conditions such as glaucoma leads to irreversible sight loss and blindness because once these cells are gone, they’re gone. So nerve cell regeneration is a key focus for research.

In this study, scientists at Stanford University in the USA tested mice with an optic nerve injury just behind the eyeball. Previous research had shown that a protein known as mTor can help optic nerve cells to regenerate. So, first the mice were treated with gene therapy to boost the amount of mTor in retinal ganglion cells. And later they were shown high-contrast images; changing patterns of black and white lines every day for 3 weeks.

Results showed that mice who saw the high-contrast images had significantly more regrowth (about 6 millimetres) than mice who had gene therapy alone. The researchers could trace the new growth because the mice were bred to contain green fluorescent protein in specific types of retinal ganglion cell.

The team was encouraged by these results and so tried the experiment again with mice that could only use the injured eye to see the black and white patterns. This time the axons grew as much as 12 millimetres, which is about 500 times faster than untreated axons.

Importantly, the new axons grew to the right places and connected up with other cells. And just as important, they didn’t go to any places they should be.

Treatment also gave back some vision to the mice. They were tested on 4 types of vision: tracking moving objects, the pupil’s reflex, seeing depth and spotting a ‘predator overhead’ (actually a growing black circle). Treated mice were significantly better than untreated mice in two of the tests, including running to safety.

“The potential to regenerate retinal ganglion cell axons that make the correct brain connections is a fantastic breakthrough in the fight to restore sight lost due to glaucoma and other optic nerve conditions. However, it is important to remember that optic crush is not typical of blinding conditions or injuries, so I look forward to seeing further studies in animal models of glaucoma, and further translation into human studies. ”

Fight for Sight’s glaucoma research programme includes understanding how the brain reorganises itself in humans with the condition and ways to protect the nerve cells from damage.