A study of millions of health records shows levodopa delays or prevents a major cause of sight loss. 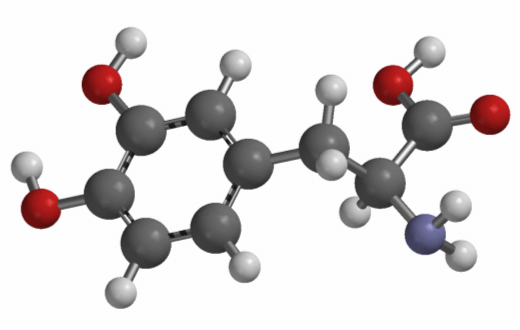 3D model of the levodopa molecule.

Researchers at the University of Arizona have found that people taking the common Parkinson’s treatment levodopa are less likely to develop macular degeneration. And those who develop it, do so later in life.

Macular degeneration affects the macula – the central part of the light-sensitive layer of the eye (the retina).  We use the macula for the detailed, straight-ahead vision needed to read or recognise faces. It also allows us to see in colour.

We don’t yet know the exact causes of macular degeneration, but certain things make you more at risk. These include older age, smoking and ethnic origin. Age-related macular degeneration (AMD) is much less common in black people than in white people, which gave the researchers the idea that there could be a link between AMD and colouring (pigmentation).

Levodopa (also known as l-dopa) occurs naturally in the body in pigmented tissue, such as in the support layer that provides essential nutrients to the retina (the retinal pigment epithelium). The researchers thought that this might mean a link between levodopa and AMD.

They looked back at the health records from 37,000 patients to find out who had macular degeneration, who took levodopa, or both. Results showed that the people with macular degeneration who began taking levodopa before it developed were diagnosed with the condition 8 years later in life than people who had never taken levodopa. There were also many fewer people with AMD in the group taking levodopa than in the group that wasn’t.

The team then looked at a much larger, insurance-industry database of medical records from 87 million people. They found the same results and were also able to see that levodopa prevents and delays the ‘wet’ form of AMD.

Wet AMD only affects 1 in 10 people with AMD - the rest have the ‘dry’ form. But wet AMD is more severe and causes 9 in 10 cases of blindness registration due to AMD.

Side-effects must be addressed

“If the association between taking levodopa and the reduced risk or delayed onset of AMD can be confirmed in clinical trials this could be a highly important new therapeutic approach, both to prevention and to treatment, using a repurposed drug currently used to treat Parkinson's”, said Dr Dolores M Conroy, Director of Research at Fight for Sight.

“In the long term, levodopa can have some serious side effects, so that’s a concern that needs to be addressed. But with an ageing population, a drug that could delay or prevent the main cause of blindness registrations in the over 65s could have a significant benefit.”

The results were published in The American Journal of Medicine.