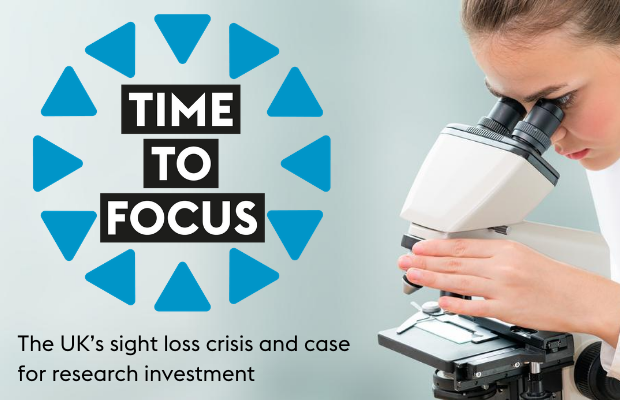 A comprehensive research study entitled ‘Time to Focus’ from Fight for Sight has highlighted the rising tide of people experiencing sight loss in the UK and the huge personal impact and wider costs to society, which have escalated during Covid-19.

The charity is calling for urgent investment in woefully underfunded eye research which, it argues, would transform lives and take pressure off an already stretched healthcare system.

The report, which was produced by Fight for Sight working with academics at the London School of Economics (LSE) and other partners, reveals that today sight loss costs the UK economy £25.2 billion a year. Fight for Sight estimates that this cost will rise to £29.9 billion a year by 2030 and £33.5 billion a year by 2050. Eighty-four percent of these economic costs lie outside the health and social care system, mainly due to lost productivity through the barriers people with sight loss experience in the workplace and the need for family and friends to provide informal care.

Rigorous analysis from over 700 interviews with people with sight loss has also shown the huge impact of eye conditions financially, emotionally and socially. The research has found that the quality of life of people with severe sight loss is the lowest of almost any other severe health condition, including depression, arthritis and advanced breast cancer[1].

Using  a new costing tool based on a review of over 350 academic papers, Fight for Sight has shown that reducing the prevalence of eye conditions by just 1 percent a year could avoid costs to the UK economy of up to £3.1 billion by 2030 and and £9.5 billion by 2050, including £1.5 billion in savings for NHS and social care services.

The new costing tool for the first time shows the lifetime costs of the leading causes of blindness. For example, the cost of a new case of age-related macular degeneration in an adult aged 50 or over, causing at least moderate visual impairment, is £73,350. The lifetime cost of glaucoma is £49,800 per person. It found that the lifetime, non-health care costs of sight loss for someone blind from birth is at least £621,384, in large part due to their education, informal care and the barriers they will experience to the workplace.

Costs to the NHS and social care are also vast, equating to £3.9 billion a year and placing the service under enormous strain, with eye conditions now responsible for ten percent of all hospital outpatient appointments.

What’s more, these costs have been compounded by the pandemic due to delays in accessing treatment. The charity has calculated that for every 100 people aged 50 to 54 with probable glaucoma who are treated up to a year late, five more people will progress earlier than anticipated to moderate visual impairment, adding up to an additional cost to society of £28,098 a year. Applied to the thousands of cases of glaucoma requiring treatment, this represents an enormous additional cost to the health service.

The report also demonstrates how research using stem cells, new gene therapies and other approaches is so close to breakthroughs and already beginning to stop many previously untreatable forms of sight loss. But a great deal more funding is needed to achieve solutions, with only 1.5 percent of national research funding currently being invested in eye research.

With an ageing population and sight loss on the increase, Fight for Sight is calling for sight loss and blindness to be treated as one of the major public health issues of our time.

Chief Executive of Fight for Sight, Sherine Krause, said: "This landmark report puts sight loss in the UK into focus and shows the huge financial, social and emotional cost it is having on individuals and society. But the true cost of sight loss is a personal one that can’t be measured in pounds and pence. Science offers so many possibilities to transform lives and there are breakthroughs happening every day. Eye research is more important than ever in the age of the Covid-19 pandemic and Brexit and our report shows how investing in research upfront will actually make huge savings for the NHS and for the wider economy in the longer term. In spite of this, only 1.5 percent of national research funding is invested in eye research, and the attention of sight loss charities has been on care and support, rather than finding new treatments and cures. This needs to change, it’s time to focus – the need is there, the science is there, but the funding is not."

The report also shows just how impactful UK eye research is – when the funding is available.

As part of the Time to Focus report, an extensive analysis of eye research publications was carried out, which shows the scope of the influence and impact UK research has on fighting sight loss globally. On average the published outputs of the UK’s eye research receive over 10 percent more citations than the world average. And the percentage of UK publications that are highly cited is substantially higher than the global average meaning that UK research is helping to shape/influence researchers across the globe.

The analysis goes on to show that among UK research funders, Fight for Sight’s expertise in identifying and carrying out research with a greater impact than that of other, often bigger, funders places it among the very best in the world. Fight for Sight funded research receives 80 percent more citations and is twice as likely to be highly cited than the world average.

Ms Krause said: "Our comprehensive research analysis proves that the UK punches above our weight in the field of eye research and that at Fight for Sight we fund some of the most impactful research in the world. We are calling on the government to double funding in the next decade to keep us at the forefront of eye research globally and help us reach our targets of new treatments for the leading causes of blindess in the next ten years."

Read the Time to Focus report Read more about our research

[1]The tool used in the survey is the EQ-5D-3L. © EuroQol Research Foundation. EQ-5D™ is a trademark of the