The treatment restored vision to mice with the most common genetic fault to cause the condition in humans.

Researchers at the University of Miami have used gene therapy to improve vision in mice with a genetic fault that mimics Leber hereditary optic neuropathy. The results will inform a current human clinical trial and could also be important for a wide range of other conditions.

Leber hereditary optic neuropathy is an inherited condition that generally affects young men, under 30. It causes sight loss in the centre of the field of vision.

Four genes have been linked to the condition so far. The faulty genes affect the powerhouse compartments inside cells that make the energy cells need to work (the mitochondria).

Mitochondria have their own DNA, that’s different to the DNA for the rest of the cell. This has made Leber hereditary optic neuropathy a difficult condition to develop gene therapy for.

Gene therapy works by taking advantage of the ability of certain types of virus to get inside a cell nucleus to the DNA. In this case the idea is to replace the faulty gene with a healthy version.

Some of the machinery that mitochondria need to produce energy are proteins made in the cell, outside the mitochondria. They have to be brought inside to do their job.

The team added a section of one such protein to act as an entry code to get the virus, and with it the healthy gene, inside the mitochondria. They also added a red fluorescent marker so that they could see whether the gene therapy ended up in the mitochondria. 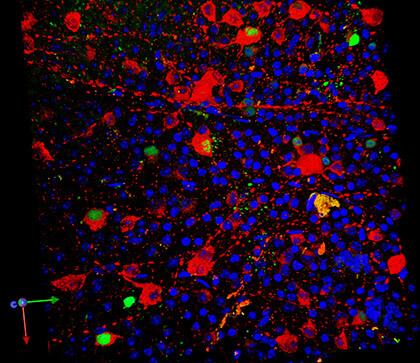 Mice with sight loss due to faults in the most common gene to cause Leber hereditary optic neuropathy in humans (ND4) were given the gene therapy by injection to the eye. Results showed that functional vision returned after treatment.

“This is the first time a gene therapy has been developed that can correct a fault in mitochondrial DNA,” said Dr Dolores M Conroy, Director of Research at Fight for Sight. “It’s a very important step forward, not least because the therapy seems able to restore lost vision. Although the clinical trials of gene therapy for Leber hereditary optic neuropathy are still in the early stages, there is real hope that the people affected may one day regain some of their sight.”

The study was published in Proceedings of the National Academy of Sciences. Results are due in 2019 from the clinical trial led by Professor Guy to test the safety of this gene therapy approach in humans.