There’s a lot of confusion about poppers at the moment. If that confusion begins with the question “what on earth are poppers?” this may not concern you, but I’ll explain anyway. Fight for Sight is interested because of the potential harm poppers can do to eyesight. So let’s take a look at what we know.

Poppers is the slang name for a group of chemicals that are sold as little bottles of liquid that give off fumes. People inhale the fumes to get a brief ‘high’. They are particularly known for being used at clubs or during sex and being popular with some gay men. 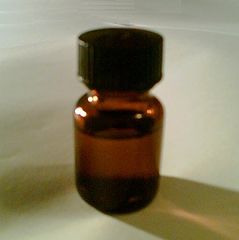 A bottle of poppers

Poppers have been in the news recently because of The Psychoactive Substances Act 2016 which is due to become law next month. The Act bans the sale of all legal highs unless they’re on a list of exceptions.

It was thought that poppers would be banned under the new law. But government advisors The Advisory Council on the Misuse of Drugs have said that poppers won’t be banned, because they don’t count as a ‘psychoactive’ substance as set out in the Act because they don't have a direct effect on the brain. In other words, the law doesn’t apply to them in the first place. The Government hasn’t responded yet.

Damage to the macula

Back to eye health, then. There are reports in science journals from the UK and abroad that some people have developed ‘poppers maculopathy’ after using poppers. The macula is the central part of the light-sensitive layer in the eye (the retina). We use it for the clear, detailed vision you need to read or drive or recognise faces.

The signs of poppers maculopathy seem to be damage to cells in the macula that can be seen during eye examination as yellow spots. The symptoms include poorer than usual or blurred vision and holes in your vision (scotoma).

Some (but not all) of the reports are about people who used poppers often. In some people their vision got better some time after they stopped taking poppers, but this also was not true for everyone, for example in this study.

What we don’t know for sure is whether poppers are doing the damage. And we don’t know how big the risk is, if so. The number of cases is very small. This could mean that the risk is low (if poppers are the cause), but it could be that some cases are missed unless patients are asked about poppers, or that some people who take poppers are more at risk than others.

Get it checked out

So where does that leave us? If you do take poppers and develop the symptoms of maculopathy, be aware that there may be a link and get your vision checked out with an ophthalmologist as soon as you can.