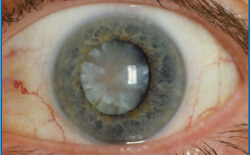 New research gives more evidence that a non-surgical treatment for cataract may be in sight. A substance that’s related to cholesterol partly reversed cataracts in mice with either age-related cataract or cataract due to genetic fault. The substance – called 29 by the researchers as it was the 29th promising candidate they tried – also worked on samples of human cataract tissue.

Cataracts cause sight loss for 1 in 2 people over the age of 70. They happen when proteins in the lens of the eye clump together. This makes the lens look cloudy and stops light from passing through. Left untreated, cataracts cause total blindness.

We don’t fully understand what happens in age-related cataract, but there are clues that proteins known as crystallins are involved. Faults in the genes for the crystallins named cryAA and cryAB cause an inherited form of cataract.

Some crystallins can act as ‘chaperones’ that help other crystallin proteins hold their shape. Without them, proteins can misfold and clump together with other misfolded proteins.

Chaperone therapies are already in clinical trials for other conditions that involve misfolded proteins, such as Gaucher disease. So in this study the researchers wanted to find chaperones that might help cryAA and cryBB to hold their shape.

They screened around 2,500 substances that looked like they might be the right type, based on their shape. Then they made a shortlist of the ones that did best job of breaking down clumps of genetically-faulty cryAA and cryAB compared to healthy versions of the crystallins. This is how the researchers found the cholesterol-related substance 29.

Substance 29 was shown to partially prevent protein build-up and also to partially reverse it, if cataracts had already developed. This was possible even with severe cataracts, and at low doses. For example, mice with cataracts due to the cryAA or cryAB genetic faults were given a single eye drop, 3 times a week for 2 weeks. Their cataracts showed a ‘striking’ improvement and stayed that way (at least until the mice were re-tested 4 weeks later).

The human tissue samples were taken from people aged 70-80 with cataracts from mild to severe. After 6 days of treatment, the samples contained 18% more broken down (soluble) protein than untreated samples.

“This is the second study to show that cataract can be treated with eye drops, even though in this case the effect was only partial,” said Fight for Sight’s Research Director, Dr Dolores M Conroy. “We’re currently funding a project that aims to identify the precise point at which protein misfolding begins. This should give us vital information about what molecular targets to focus on in non-surgical approaches to treatment.”

The substance referred to in the study as 29 has the scientific name 5-cholesten-3b,25-diol. Results were published today in the journal Science.

Read more about this research on our science blog.